Fool me once, shame on me. Fool me twice, I write a book and seek cold-blooded revenge. At least that's what you do if you're Jeanine Renne, author of "When a Fan Hits the Shit," a book that details her experience being conned by a fake charity run by two women in Portland.

"The book shows how I got roped into the scam and then dissects the lies, forgeries, blacklisting, and other sneakiness that Those Two used to pull the whole thing off," said Renne. "It's not so much a whodunnit as a how they dunnit, a look into the warped minds of small-time sociopaths."

The book is available locally at Jackson Books, the Book Bin and the Willamette University Bookstore. Renne will be at the Book Bin on April 6 to do a signing. She also has several television appearances scheduled to help get the word out about both her book and the con artists.

"The law wouldn't do anything to stop them," said Renne. "So I decided to take this story to the public and put a stop to them myself."

Renne is using a percentage of the sales income from the book to pay back the victims of this con, including the real Reading is Fundamental charity, which was promised money by the con artists. 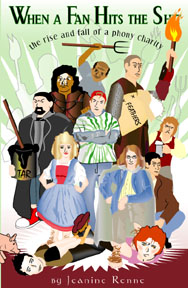 When A Fan Hits the Shit:
The rise and fall of a phony charity

After weeks of waffling, the decision finally came down from the upper echelon: Pikachu. Spiderman, Batman, and the vaguely described monsterbeast thing would have to wait for another Halloween. It was time to go to the fabric store for some goldenrod fleece and brown felt. As I loaded the baby into the van, he squawked in ire at being stuffed into his carseat. He must have known he was doomed to wear Big Brudder's hand-me-down "Gentleman Bug" costume. It was a perfectly ordinary fall day in the Pacific Northwest, crisp and cool with a hint of smoke in the air--until we got home and discovered the business card wedged into the screen door.

With "Please Call Me" scrawled on it in black pen.

I instantly knew this was about Jordan.

Jordan responded that Stewart was just lashing out because he didn't like learning about Billy Boyd's future events from his own message board. Billy had two PR agents representing him: Aude in London and Daphne in Los Angeles. Jordan arranged everything through Daphne, so Aude had not been involved. But Stewart, being in Scotland, naturally contacted Aude when he saw this claim about Billy's schedule and Aude knew nothing about the Lost Palantir Film Festival. Stewart leapt to the conclusion this was a scam and then refused to lose face by admitting he had been mistaken.

Jordan spent weeks trying to work things out again with Stewart, Daphne, and Aude. Daphne sent an email stating Billy was no longer interested in appearing at LP because of this controversy. Stewart wouldn't even answer Jordan's emails. Finally, three weeks before LP, Abbey and Jordan called in the cavalry. Abbey punched the Sacred Sean Astin Speedial and explained the situation to Sean. Sean spoke to Billy, cleared up the confusion, and assured Billy that BoE was legitimate. Because of Sean's recommendation, Billy decided to appear at LP after all! Another BoE miracle was in the making.

By that point, Billy's people had booked up his schedule, so it would take some rearranging in order for him to make it to LP. That proved too tricky. Billy tried to squeeze LP in, but he was slated to appear on the Conan O'Brien show on the night of LP and Conan was a notorious diva who just wouldn't reschedule his guests. The Lost Palantir lost Billy to Conan's prima donnitude.

Not wanting another debacle, Jordan got in touch with Sean Astin, Viggo Mortensen, and Dominic Monaghan, hoping one of them would be interested in coming instead. And amazingly, all three agreed--things were slow at their homes in LA, it was a short plane ride to Portland, so they decided to do it together just for fun.

Furthermore, Sean had just been approached by the E! Entertainment Network because they were developing a short series about celebrities and volunteering. This was a perfect opportunity for a crew to tour the Elanor garden with Sean and meet some of the BoE volunteers.

Days later, New Line Cinema released the movie Secondhand Lions, which featured the first theatrical preview of ROTK. People went to the movie just to get a look at the trailer and New Line wasn't going to let a promotional opportunity go to waste. Suddenly schedules that were wide open the day before were booked solid with interviews, sound bites, and whatever else movie stars do to publicize their films. Once again, whimsy robbed LP of its celebrity hosts. Even Sean had to postpone, although E! was still sending up a team to tour the garden.

Well, if you can't have a celebrity attend, what's the next best thing? Jordan sent Sue Astle to Los Angeles on the evening of September 18, 2003, armed with a video camera and the blank Winner's Certificates for the film festival. Sue was to visit with Dom, Viggo, and Sean, to tape their personal video greetings for LP. She would also get their autographs on the certificates. It wasn't optimal, but not a bad substitute either!

Sue arrived in LA and, after a snafu with her rental car, took a cab to her motel. She was supposed to meet Sean Astin, pick up the tape Sean already made for LP, and have him sign the certificates. Jordan called in to let Sue know that, unfortunately, Sean was in such a hurry, he just left his tape with Gibson, his PR representative.

The next morning Sue went straight to Sean's PR office. Gibson handed her a tape and apologized that Sean had missed her; he had to leave town suddenly.

Sue called Jordan and was told Viggo Mortensen would be next. Viggo was doing voiceovers in a studio up the street and he wanted her to stay put for the moment. Jordan would call her back as soon as Viggo was ready to meet her.

Actually, it wasn't really that bad. Gibson and her staff were friendly and they even helped Sue figure out how to operate the camcorder that had been stuffed in her hands just before her flight to LA. Sue spent two hours there, but she finally sought refuge downstairs at Nibbler's, the lobby restaurant. The prices were somewhat different from typical Oregon fare. Sue nibbled free mints from the bowl by cash register and ordered one tea bag and a lake of hot water. She begged forgiveness from the wait staff for being such an utter cheapskate, but they didn't mind her a bit--they even kept her supplied with bread and crackers. Six hours later, Jordan finally called in. Viggo had just finished his work, and although he was too tired to talk now, he wanted to meet her right there tomorrow at 11:00 AM.

The next morning, Sue ate her meager breakfast of crackers smuggled from Nibbler's and went back to the PR firm to wait for Viggo. It was Saturday and the restaurant was closed, so there weren't even any free mints. She was reduced to pacing on the sidewalk.

No Viggo.
No explanation from Jordan.
An hour went by.

Viggo must have stood her up. She had to leave to make her next appointment, which was with Dominic Monaghan at his home.

Sue called yet another cab at her own expense and headed toward the address Jordan supplied. Traffic was terrible. It came to a point where Sue had to choose between getting to Dom's house and making it to her flight. This was Saturday, September 20, 2003, the day of the Lost Palantir Film Festival, and Sue was holding the video from Sean Astin in her hand. Missing her flight would mean missing the festival and Sean's lovely gesture would end up a waste of his time. The cabbie pulled an illegal U-turn and raced Sue to the airport; they pulled up with 11 minutes to get to her gate. She ran through LAX as though the very whips of Saruman were behind her. The jetway was already starting to retract when she charged up, breathless, but she made it to her seat just in time to spy one of Air New Zealand's LOTR jets roll by, painted with the rolling hills of the Shire and the faces of Frodo and Sam.
____________________
Footnote: Unfortunately, Sue was so out of breath from her sprint through the airport that she could only gasp and point at the window. Her fellow passengers, already not particularly disposed toward this latecomer, nervously assumed she was trying to say, "There's a man on the wing!"